0
was successfully added to your cart.

Tons of emissions and thousands of dollars can be saved with passive and active solar thermal systems. 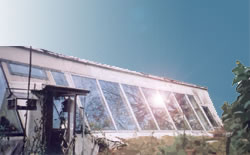 Passive Solar means the system works without pumps or other equipment. An example of this system is a south facing window that allows sunlight to heat an adobe wall in the winter.

This simple example can heat the room not only in the day, but the adobe stores the heat with its thermal mass, so that the heat can pay back into the room long after the sun goes down. Passive Solar systems require no maintenance. WE offer consulting and evaluation of building sites and architectural plans. Passive solar can be incorporated into the plans for very little extra cost, but once the building is completed, it is often difficult to retrofit with solar. Contact us before construction begins, you’ll stay warmer, happier, and save lots of money while helping save the planet.

Active Solar refers to systems that heat water, glycol, or air in a special solar thermal panel and then pump this heated fluid into the house. These systems can heat rooms, but are more commonly used to heat water for showers, dishes, etc. Active Solar systems require maintenance of the pumps, controls, and plumbing involved. We have done several years worth of research and development of a solar hot water system that has its own solar electric system for the pumps and controls. This system allows people using solar power for their electricity to use solar for their hot water t00. We currently are not installing Solar Hot Water systems, but we can provide consulting, sell parts, and will happily refer you to others who specialize in only solar thermal.

We have a current Solar Hot Air experiment that uses an insulated airspace under a dark colored standard Propanel roof. While the efficiency of such a system will be significantly lower, the cost and aesthetic advantages are worthy. Instead of rows of awkward solar thermal panels mounted on the roof, there is no visible evidence of a solar thermal system. Fresh air is drawn in at the eaves of the roof, and then is heated in the 1″ space under the dark metal roof. A small blower then draws the heated air and blows it through insulated ducts into the north side rooms. This system is not intended to be a stand alone heating system, instead it works with the south rooms’ passive heating and the traditional floor heating. Instead of trying to solar heat a few homes 90% (as the Earthships do), we are looking for methods that could be more easily integrated into millions of homes. If we can reduce the heating load on a million houses by 20%, we have saved as much fuel as a 1/4 million Earthships could. While Earthships remain an good choice for the “truly committed”, we’re researching for solar heating methods that will appeal to the general public.

Solar vision has unrivaled experience in the design, installation and maintenance of renewable energy systems into the commercial sector. With a full multi technology capability for all renewable energy technologies we are able to design the renewable energy solution that best fits the needs of your projects. Read More